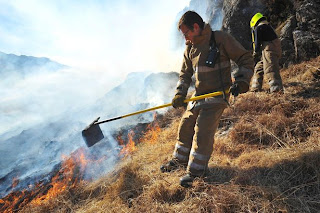 The Scottish Fire & Rescue Service has issued a press release to confirm that all wildfires have now been extinguished and comments that this has only been achieved after an enormous amount of blood, sweat and tears by firefighters.  Well done all!

The press release includes a caution that muirburn should only be undertaken with very close attention to safety procedures, having first carried out a risk assessment. The FRS press release can be downloaded from the FRS website.

Understandably in the circumstances, the value of muirburn has been questioned and fingers have been pointed at those who have been lighting fires. In response to these issues,  I was pleased to hear that Michael Bruce, a landowner, member of The Heather Trust and Chairman of the South Grampian Wildfire Group met with Robert Scott, from the Scottish Fire & Rescue Service this afternoon. Following this meeting a statement has been agreed with Scottish Land & Estates as follows:

Landowners from the North and North-east of Scotland have held ‘very constructive’ talks with the Scottish Fire and Rescue Service following the widespread outbreak of wildfires.

Mr Bruce said: “We had an excellent meeting and there is no doubt that now landowners who have been involved in efforts to tackle these wildfires are on the same page as the fire service. We welcome Mr Scott’s recognition of the role that landowners and land managers play in dealing with these fires and there is a real commitment to work together in future. As an example, a call for help in the Highlands earlier this week resulted in local landowners offering to provide 10 specialist fire fogging All Terrain Vehicles that could be used in fire-fighting operations, within 10 minutes. That is the kind of response we offer and criticism of landowners earlier this week from some quarters was unwarranted. We have agreed with the fire service to revitalise the work of the Scottish Wildfire Forum, which has been a key focus for partnership working on wildfire issues since 2004.”

This is good, positive stuff and I hope that it will lead to lessons being learned, and applied, as the result of these wildfire incidents. We need to keep matters in balance and make sure that we do not end up with a result that will lead to less muirburn and an increased risk of damaging wildfire.
at 18:46