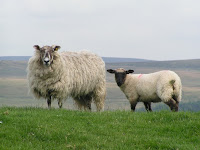 In some good news for upland farmers in England, the Rural Payments Agency has said it paid out more than £2m to beef and sheep farmers eligible for Uplands Transitional Payments within three weeks of the payments starting.

The Uplands Transitional Payment is made to Hill Farm Allowance claimants in 2010 who cannot yet enter the replacement scheme, Uplands Entry Level Stewardship because of an existing agreement under the Environmentally Sensitive Areas and/or Countryside Stewardship Scheme.

Up to Wednesday 27 March, the government agency said it had made payments to 925 farmers. This is equivalent to 73% of those eligible for money and more than 67% of the total value of the scheme being paid.

This appears to be impressive, but should the RPA be satisfied with 73% in three weeks?  How long will it take to pay the remainder?
at 14:46