With the ever-increasing scrutiny of traditional forms of moorland management, many feel the solution lies with the sector itself to get on the front foot in terms of adopting, demonstrating and promoting good practice if it is to avoid further regulation.  In our June blog, the Heather Trust hears from the British Game Alliance about their game industry accreditation scheme that is offering shoots an opportunity to demonstrate their management credentials and develop higher value markets for their product. 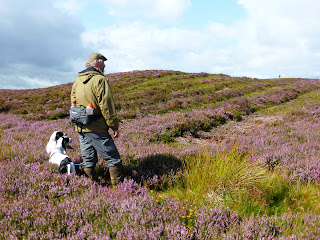 Since its launch just over a year ago the British Game Alliance (BGA) has seen significant success, having signed up over 500 shoots to its assurance scheme and developed new markets for game both overseas and at home.

British Game Alliance Chairman, Ivan Shenkman, said, “This has been an astonishing inaugural year for the British Game Alliance. The BGA has achieved far more than the founding members believed was possible in the early stages. We are well on the way to achieving many of our initial objectives and planning many exciting developments for the future.”

The success of the BGA’s year is thanks, in no small part, to the support the organisation has received from the wider shooting community, including other organisations such as the Game and Wildlife Conservation Trust (GWCT) and BASC and individuals like the BGA Ambassadors.

Ensuring best practice
The BGA was formed with the aim of increasing the demand for and the value of British game, but the organisation’s Assurance Scheme and Shoot Standards offer an unrivalled opportunity to demonstrate the beneficial impacts of the game industry from an environmental perspective. In addition to food handling and animal welfare guidelines, the shoot standards include points to ensure that BGA accredited shoots adhere to best practice when it comes to conservation and the impact on the wider environment.

There are specific measures requiring BGA accredited shoots to abide by The Blanket Bog Land Management Guidance and the Heather and Grass Burning / Muirburn Codes, as well as revoking membership of those successfully prosecuted or cautioned for wildlife crimes from membership of the organisation. There are also more general points requiring that shoots “ensure the land is appropriately managed to continually benefit wildlife and its environment” and that stocking densities of released birds have no negative impact on the biodiversity of the surrounding environment.

An important part of getting the message about the positive benefits of game shooting out into the wider world is being able to demonstrate the environmental and conservation credentials of these shoots – even those who are currently doing a good job.

Since being launched, the Assurance Scheme by the BGA has audited 33% of the 500 + registered shoots and aims to increase that to 50% for the coming 2019/20 season. Regular auditing is essential to give credibility to the assurance scheme and its member shoots and to help build confidence among consumers of game and the wider public that best practice is being followed. The BGA has, with the help of GWCT and Moorland Association, trained 8 auditors to complete shoot assessments around the UK.

The BGA encourage registered shoots to embrace the audit process, which need not be feared. It is a process to help each shoot understand what abiding to “best practice” means and to make any changes, if necessary, with the help from the auditor. As part of our registration agreement a shoot agrees to adhere to the BGA Assurance scheme standards, so the assessment is a means of verifying this. Many moorland managers and gamekeepers are rightly proud of the work they do to conserve and manage these important habitats and the BGA’s scheme gives them the chance to demonstrate it in a verifiable way.

The BGA encourages shoots of all sizes to join its initiative to implement a credible self-regulation across the shooting industry, ensuring we abide by “best practice” and offering us political security for a sustainable future.