Let’s not throw the baby out with the bathwater 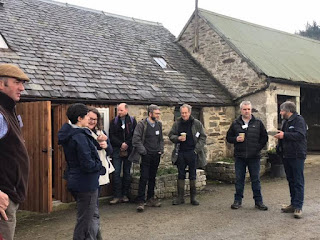 On 21st March the Trust held the first of a series of planned events for 2019, where we ask the question “What are Britain’s uplands for?”.  We were kindly hosted by NFU Scotland’s Vice President, Martin Kennedy on his hill farm in Highland Perthshire.  The event attracted a mix of different interests from government, research, conservation, and hill and moor farmers and managers, and provided an opportunity to get these various interests talking on site, in a real management situation.  In our March blog, Director, Anne Gray, provides some thoughts from the day…………

Martin Kennedy’s set up will be familiar to many farming families in upland Scotland.  He has in-bye, heather moor and open hill ground – ranging from 800 to 2500 feet above sea-level.  He is farming both native and continental sheep and cattle breeds, with the natives on the higher ground.   The farm is tenanted from Edradynate Estate and the Estate’s keeper, Ian Smith, also joined us on the day to discuss how the farming and shooting enterprises work together.

One of the first things we looked at was the game crops which provide food and cover not just for pheasants and partridges, but for a whole host of wildlife.  We also discussed the range of waders that breed on the farm each year, including curlew and lapwing.  One of the inbye fields is called peesies’ field because of the numbers of peewit (or lapwing) that have traditionally bred there, although Martin points out numbers have reduced in recent years.  Also evident is a good range of raptor species.

As we moved up the hill, we talked about Martin’s livestock choices.  He’s fairly recently bought a small herd of Highland cattle for his moor and hill ground, and also been building up a flock of cheviots.  Previously it was Scottish blackface sheep that grazed these areas and he still has this flock but is reducing numbers.  In future he’s sees that the blackface sheep might go altogether and he’ll have a mix of highland cattle and cheviots on the ground.  He says he’s already noticed the difference having cattle on the hill has made to the management of his moor and, despite being slower to finish than the continental cattle he keeps on the in-bye ground, they also require much less management and inputs, so the margins are just as good if not better.  The meat, he reports, is also first class.  It’s a trend we might see in future.  There is certainly more and more talk of cattle being returned to the hill for the benefits they bring to good grazing management, and they play into a narrative about slow grown quality food from an extensive management system.

One of the really interesting points made at the event was about the tendency previous land management policy has had to “flip-flop” between extremes.  There is a worry in my mind at least, that there is a growing trend in upland policy circles to see hill cattle as the answer to better moorland and upland management, and that our next policy move might be to encourage wholesale replacement of sheep (and other management tools) by cattle regardless of the context.  This one-size-fits-all, generic response would undoubtedly be as problematic as all the other one-size-fits-all, generic responses of the past that we have subsequently reeled back from.  The return of cattle to the hill is to be welcomed, but as Davy McCracken of Scotland’s Rural College said at the event “they are the answer in some places, part of the answer in others and might not be at all in yet others”.  As was said on the day, we must be careful not to throw the baby out with the bath water as we have done so often with land management policy changes in the past.  Let’s instead evolve our management approaches and try new things, but without slamming the door completely shut on what in effect we might just need to modify.

Left to his own judgment Martin, whose family have been farming the hills above Aberfeldy since 1947, will take an evolutionary approach to management.  He’s shifting the balance from just sheep to a mix of sheep and cattle.  He does some muirburn too, and he’d like to explore agro-forestry whereby, when established, he could graze his livestock in woodland and forestry.  This says much about ensuring that whatever system replaces current agricultural support regime, we ensure it is flexible enough to allow tailored solutions to local management objectives, rather than prescription from the top-down.  There are indicators that things may going that way.  Let’s hope so and that my concerns are unjustified.

As Vice-President of NFU Scotland, Martin is in touch with the political situation and the likely direction of new policy.  He understands the imperative to deliver for the environment but cautions that society takes food and its production for granted.  He points out that we need to find the right balance between delivering for the environment and delivering food, otherwise we risk by default exporting our food production to other countries and in doing so we also export the environmental footprint that comes with it.  Balance and integration are, as always, the key to managing our moorlands and uplands.

While society may be in danger of taking good quality, high welfare food for granted, we have almost certainly up to now taken nature for granted.  Scottish Wildlife Trust’s Head of Policy, Dougie Peedle also joined us on 21 March.  Dougie reminded us of the environmental pressures we all face and must learn to address more effectively.  He highlighted the Natural Capital approach to land management as a way forward.  Looking through the lens of Natural Capital, is a way of creating a level playfield for all of the things that nature gives us from food, game, and tourism opportunities to clean water and air, natural flood management, pollinators, carbon storage, and opportunities to enjoy the countryside.

As was pointed out on the day however, we still seem to be a long way from properly capitalising Natural Capital, and until we do it is difficult for those who need to make a living from the land not to prioritise the things they get paid to deliver.

We had great contributions at our event from a wider range of interests and we hope to engender the same at the next six events we have planned for 2019.  Our next two are at The Hopes Estate in East Lothian on 24 April, an Estate with a focus on farming, shooting and conservation, and at Braemar on 10 May where we will look at contrasting sites being managed by members of the East Cairngorms Moorland Partnership.