THREE families of beavers will today become the first to be released into the wild in Scotland for more than 400 years.
From Norway, the 17 beavers are being released into sites in Knapdale Forest, in Argyll, after six months in quarantine. See the BBC Article or the Beavers Network Home Page

Opinion is bound to be divided over such introductions. There will be concerns about the effect on salmon spawning and there is also the concern about how can the expenditure involved in such re-eintroductions bve justified when there are so many calls on the available cash. From a Heather Trust's perspective. could more not be achieved by regenerating areas of lost of heather which would be likely to have much greater impacts for biodiversity.
at 11:58 No comments:

The Welsh Assembly Government plans to replace its five existing agri-environment schemes with a new two tier land management scheme to be called GLASTIR. The aim will be to retain spending at around £89 million a year but the money will be better spent. One of the stated benefits from the all-compassing scheme will be to produce mean a reduction in red tape for farmers, lower administration costs and greater environmental benefits. As ever, it remains to be seen whether this utopian ideal can be achieved in practice without reducing the payments available for farmers.

The status of the Dartford Warbler 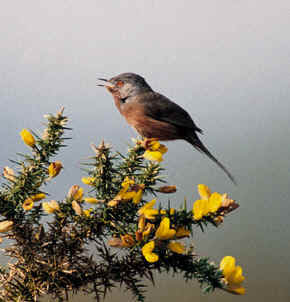 This is a a brief summary of a paper just published in the journal British Birds (The status of the Dartford Warbler in the UK in 2006, Wotton et al; 102:230-246) which highlights the spread of the Dartford Warbler in the UK.
Originally a bird of coastal lowland heath in SW England, the recent survey (conducted in 2006) highlights the continued spread beyond these traditional haunts. Upland areas, including Dartmoor, Exmoor and the Brecon Beacons, now hold significant populations of this brighly coloured but elusive little warbler.
At the time of the last survey in 1994 Dartmoor, Exmoor and the Brecon Beacons held 4, 1 and 0 pairs respectively, the 2006 survey reported a major population expansion with 52, 118 and 4 pairs now present. Early surveys (1974 & 1984) recorded few birds beyond 100m above sea level, in the latest survey altitudinal spread was far greater with the highest breeding being noted at 462m on Exmoor.
Interestingly the spread has not only been in altitude, the species is also heading northwards with 3 pairs reported on the Staffordshire heaths near the southern end of the Peak District.
The marked increases on Exmoor and Dartmoor suggest that upland heath is becoming increasingly important for Dartford Warblers. The authors believe there is great potential for this species to spread further into the upland habitats of South Wales and also into the Peak District. It is suggested that the shift in altitudinal distribution between 1984 and 2006 could be linked to climate change, and possibly the main factor is the increase in milder winters rather than warmer summers. It will be interesting to see the impact of the 2008/9 winter on the populations, particularly those of upland heaths, as it was the coldest winter since 1995/6 with extensive snowfall in the core Dartford Warbler counties of southern England. The species has been affected by harsh winters in the past and it is known to recover quickly in numbers and range following a run of milder winters.

You may also be interested to know that there are, according to The Birds of Scotland, only two records of Dartford Warbler in Scotland - one was seen at St Abbs Head, the other I believe was on Fair Isle.