There have been several wildfires in different parts of the country and the current dry weather is increasing the risk of damage day by day.

the amount of damage that wildfires can do comes as no surprise and the effort, and associated cost, required by the Fire & Rescue Services to put these fires out is enormous.  For those who would like details of recent wildfires see the following links: West Yorkshire, the Highlands, and Inverness-shire.

I am sure that there have already been many more examples and I would like to be sent details.  I fear that if this dry spell continues there will be plenty of work for the Fire & Rescue Services.   To those out & about in the UK uplands, this weekend, I ask that they take care not to start fires.
at 17:45 No comments:

The Forestry Commission has published a very useful summary of the spread of P. ramorum into larch trees and the measures that are being taken to control this spread.  It appears that the disease is targeting rhododendron and larch trees at present and that the report of its spread into sitka spruce has so far proved to be inconclusive.

The spread of the disease into heathland species has so far been restricted to a small area of blaeberry. Heather has been shown to be at risk in laboratory tests, but so far the disease has not been seen on heather in the wild.  This remains the nightmare option.
at 14:29 No comments:

Climate care – not this carbon klondike

For an alternative view on the carbon : renewables : windfarm : landscape debate see the opinion piece by Dr Keith Dawson that has been published by Scottish Farmer.

The voices of the dissenters to the 'windfarm at any cost' approach demand to be heard.
at 11:16 No comments:

The Scottish Countryside Alliance has prepared a comparison between the manifestos of the main parties ahead of the election on 5 May and published it as part of their Heather Routes service.

This comparison has been reproduced for your information here.
at 13:19 No comments: 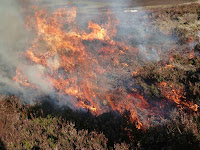 Under the amendments introduced by Section 28 of the Wildlife & Natural Environment Bill, that received Royal Assent on 7 April 2011, the Muirburn season is now defined as follows:

Burning may only take place in the Muirburn Season.  The proprietor of the land may carry out muirburn in the extended season and other people may do so if authorised in writing by, or on behalf of, the proprietor.
The season is now the same at all altitudes and the possibility of burning until 15 May above 1,500 feet has been removed.
Therefore, for proprietors, and those who have the necessary permission from the proprietor, muirburn can be carried out until 30 April.
The Bill introduced the possibility of being able to burn out of season under licence, and as Chairman of the Muirburn Group of Scotland's Moorland Forum, I will be working with members of the Group, the Scottish Government and Scottish Natural Heritage to establish guidance on eligibility and to set up a process to handle applications.
at 12:13 No comments: