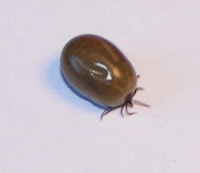 I have long campaigned for sheep ticks to be given a higher profile. The damage the diseases carried by these insects can cause to sheep and grouse are well known and the control groups have been successful in various parts of the country in controlling their numbers. The tick survey that I included details of in recent Annual Reports indicates that ticks are increasing in range and abundance and we need to be doing more rather than less to control their numbers.

For those unfamiliar with sheep ticks, particularly their potential impact on humans, I can do no better than direct you to two websites that have a lot more information: Lyme Disease Action and BADA-UK.

I was recently sent the salutary tale below. This shows that the activities of ticks are not confined to the humble grouse or sheep and Lyme disease is a real threat to humans.

"At a wedding dinner last weekend I sat next to the mother of a 28 year girl called Tilly (also a guest at the wedding) who was confined to a wheelchair on account of Lyme disease.

During the course of dinner I asked about this disease and was concerned by what I heard. The key points that she emphasised have stuck in my mind:

1. Tilly was bitten by a tick between her toes when she was aged 16 - she was not aware of a rash developing at the time.
2. The bacteria carried by the Tick can attack the nervous system which is why Tilly can no longer stand up – it has very nearly killed her 3 times. She has resorted to Chinese medicine as nothing else seems to work.
3. Removing a tick correctly with a tick hook reduces the chance of infection – if you just pull them off they eject their contents from their mandibles.
4. Check for ticks on yourself/children if you have been in an area likely to harbour ticks
5. If anyone finds a tick on their skin:
a. Remove it correctly with a tick hook
b. Watch for flu-like symptoms or a rash. If observed, ask that your GP gives a course of anti-biotics.
6. Treatment with doxycycline or amoxicillin for 14 days is usually very effective in shortening the duration of the rash, and curing the infection.
7. If untreated, nervous system, arthritic or other complications may develop weeks or months after the infection has occurred.

What is most frustrating to Tilly’s mother is how easy it would have been to have prevented this disease from getting hold of Tilly had they caught it earlier."
at 16:01