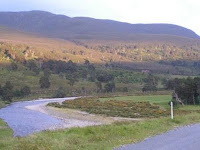 The NFU Countryside website has reported that The Moorland Association, The National Gamekeeper's Association and the Countryside Alliance teamed up to commission a survey covering the public's perception of heather moorland. See the full article.

I believe that the uplands are taken for granted by the public at large whether this be in the Peak District, where there are 20 million visitors every year, or in the remoter parts of highland Scotland. The complacent view is that the uplands are always there, they always have been and always will be. I think we need to be doing more to challenge this perception. The uplands are not the preserve of the conservation bodies and NGOs, they have developed as a living and working landscape that has been heavily influenced by man's activities, often for the better. As a result we have a decision making role to play in what they look like into the future. A vast amount of private sector money goes into their management and the land management community need to be proud of this. It is not all about sporting activities, part of the justification for ownership is often the pleasure from owning these iconic landscapes. All the different sectors, need to work together better to banish complacency and to harness available funding and aspirations. There is a role for The Heather Trust!
at 15:38