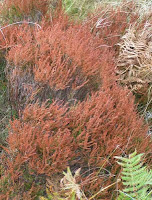 I was called yesterday from Blairgowrie Golf Course, which is a heathland course. They were worried about the state of some rank heather under Scots pine trees. It appeared to be showing the classic signs of heather beetle attack that can be expected to appear in late July. The heather had turned a foxy red colour and was not flowering.

This report was backed up by a request for a visit to Langholm Moor where a large area of heather has been hit by what is reported to be heather beetle. I have agreed to visit the moor tomorrow and I will report further. With such a high profile location it is an opportunity to raise once again the issue of heather beetle especially as a high level visit from the Scottish Government takes place next week.

I hope owners of moors will look at their own heather over the next few days and weeks and let me know if they see any sign of heather beetle. Only by collating data that shows the extent of heather beetle attacks can we hope to raise the profile of this scourge of heather so that funding can be obtained to sort out what drives the attacks and how best to restore damaged moorland. In the meantime the best advice is contained in our guidance that is available from our website.

Members may be interested in the MSc project that has been written up for the Annual Report. This is being funded by the Trust and when completed it will provide a summary of all research that has been carried out into heather beetle to date. The early findings of this work support the need, as outlined above, for more research into the ecology of the beetle and how to best manage heather after a beetle attack.
at 18:06