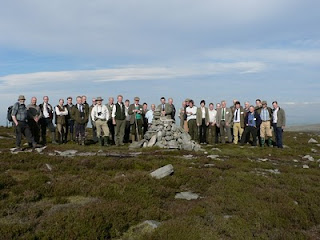 The Trust's AGM took place at the Inn at Whitewell, on the south side of the Forest of Bowland in Lancashire yesterday.  This was followed by a discussion meeting, The Abbeystead Meeting, which included a visit to the Abbeystead Estate.  As the photo shows this event was blessed with perfect conditions and warm, September sunshine.  I will be posting more information from the event soon, but in the meantime I would like to express my thanks to the people who made this event possible:

I remain convinced that meetings such as this are valuable, as they bring people from a range of backgrounds together.  Discussions during these events can challenge perceived ideas, but in a productive non-combative way.    It may not be possible to achieve complete consensus, but during discussion it is possible to establish what people and organisations really think as opposed to what they are prepared to say for public consumption.  We need some consensus, as without any it is harder, or even impossible to make progress on the difficult issues of the day.

One person said to me yesterday, the HT approach is welcomed because it is conciliatory.  It was an interesting and welcome comment and one that I am very happy to accept.  The approach is all about bringing people together rather than driving a divisive wedge between people and organisations who may have different views.   As a result of the cross-sector work we carry out, the Trust is, perhaps uniquely, able to promote this approach.
at 12:45