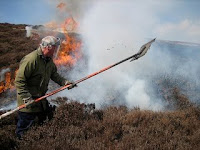 I attended this 25th meeting of the Group and as always it produced some lively discussion.

Martyn Howat, the former uplands director for Natural England, had chaired all previous meetings, but following his retirement in December, a new chairman, Tim Hill, was introduced and this was his first meeting. It was something akin to being thrown into a cock pit!

One of the key issues for discussion at the meeting was how to select an appropriate burning rotation. The tension was highlighted between the perceived desire by conservation interests to adopt a longer term rotation compared with the pressures on moorland owners to maximise the production of their heather for grazing and grouse benefits, which moved them to favour a shorter rotation.  It was also noted that generally young heather regenerates better after burning than old heather. Young heather is able to regenerate from stems, whereas the old heather has to rely on regeneration from seed which takes longer and is less certain.

The Moorland Association will be producing a list of factors to be considered when determining the burning rotation and this will be discussed at the next meeting. Progress of the Group is slow, but reasonably certain, and there have been many achievements in the 25 meetings.

An interesting scientific comment came out of the meeting that "Pyro-diversity begets bio-diversity" and this provides weight to the argument that burning is good for many interests, not just grouse production.

I presented the report that we have published recently "Heather And beetle: a review" (see post 14 April) and I presented the draft Guidance Note that I had prepared that is intended for theDefra website to support the Heather and Grass Burning Code.  Further revision will be needed but I hope we can get to a finished article soon.

The Group next meets in July at Bolton Abbey and the meeting will include a site visit. This is always an advantage as it allows practical issues to be considered as well as the theory.
at 11:36