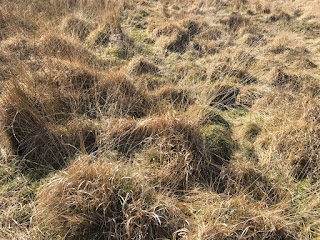 The moorland grazing presentations delivered by our guest speakers after the recent AGM were very inspiring and thought provoking. Malcom Handley from the Forest of Bowland described how he had reduced the number of sheep on his upland farm and taken on a herd of Belted Galloway cattle in order to tackle an area dominated by Purple Moor-grass. Within a year or two, the tussock grassland and dense litter, associated with this vegetation, had been trampled and grazed enough to allow room for the growth of dwarf shrubs, such as Heather and Cross-leaved Heath. It was felt that the cattle also seemed to be doing a very good job at reducing the fuel load in the upper moorland whilst retaining plenty of Heather and so muirburn was not deemed necessary for the time being. Malcom mentioned the importance of the rare breeds subsidy that made this viable. His other reason for using Belted Galloways was because he could see them easily in bad weather. Whilst there was no quantitative evidence Malcom could point to, he believed that his sheep were also in better condition since the cattle had been doing their stuff.

Christina Williams from Molland Estate in Exmoor, Devon, gave a presentation about The Graze the Moor Project1.  Molland Moor was designated a Site of Special Scientific Interest for its heather moorland but in recent decades Heather has been declining. There are various reasons why this has occurred but one of those was thought to have been the lack of appropriate grazing, owing to the restricted period (15th May to 15th July) that cattle could be put on the moor, under the Environmentally Sensitive Area requirements. The restrictions meant that tenants found it uneconomical to put out hardy livestock on the moor for just two months each year. Christina has experienced many ups and downs over an eight-year experiment involving many stakeholders, including The Heather Trust, but can now report  that: the valuable vegetation was not damaged with increased stocking levels, over a longer experimental grazing period, provided they were kept moving; Heather could be regenerated by burning over as large an area as possible, to remove dead Purple Moor-grass litter, and then allowing stock to graze any new growth of this grass; Bracken and Gorse could be controlled along with Purple Moor-grass by this process; and whilst tick levels remain a concern, the use of hardy cattle, in a low-input and low-output system, compares well against higher-output but higher-input systems that do not engage with the moorland. Christina emphasised the point to policy makers that a one-size fits-all approach is too prescriptive and that what has worked for Molland Moor may not work for people farming land a few miles away, at Porlock Hill, let alone those farming moorland in the north of England.

Campbell Slimon of Breakachy Farm, near Laggan, Inverness, talked about the long history of grazing cattle on the hill ground of his property in the Highlands. It was encouraging to hear that he does not have to use Ivermectins to protect his cattle from worms and that as a result, the invertebrates associated with cowpats are thriving. This then provides a source of food for wading birds and other species. Campbell clearly took an interest in the wildlife that benefitted from his traditional management of the moorland, which includes muirburn, and mentioned regular sightings of eagles. He expressed concern about what will happen to ground-nesting species, such as Hen Harrier and waders, on land that has been taken out of production in order to return it to woodland, as well as the increasing levels of fuel load.

All three speakers were passionate about their land and trying to farm in a way that sustained or improved the moorland habitats. Appropriate levels of hardy cattle were an important part of habitat management at all three of these upland properties, along with intelligent muirburn at Molland Moor and Breakachy Farm. National policy makers would do well to reflect on how best they can encourage local solutions to facilitate sustainable livelihoods and enhance moorland habitats for wildlife. Readers are encouraged to post their thoughts on the case studies summarised here and please let us know about any other projects that demonstrate sustainable management of moorland.