England: Wildfire in the news 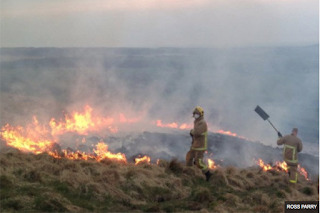 With the outbreak of summer across the country has come a rash of wildfires, and the associated images of fires lighting up the sky and Fire & Rescue Service personnel working in, what for many, are unfamiliar conditions.

It is a great concern that a lot of the fire fighting effort comes as a result of acts of stupidity.  A fire near Ladybower Reservoir was started by a disposable barbecue.  See the Derbyshire Times report.  A member of the firefighting team had to be evacuated by helicopter after their all-terrain vehicle overturned.

Near Darwen, in Lancashire, it is believed that a large wildfire was started by arsonists.  See the report in the Daily Star.

Ilkley Moor also suffered a wildfire, and this was on a steep bank that made it difficult to tackle.  BBC News has a report of this incident.

These incidents prove that wildfire is a real risk, particularly at this time of year. Efforts to raise awareness of the dangers associated with wildfire tend to fall on deaf ears at other times of the year, but we need to learn the lessons about wildfire and make better efforts to plan for them so that we can minimise their impact when they do occur.  It is a certainty that while there are people on our moorland and open spaces, wildfires will continue to occur.

The previous post about wildfire situation in Scotland states that, "We have a forecast of settled dry, warm and at times windy conditions over the next week. We therefore ask people to be vigilant and act responsibly while this period of weather affects the country".  This applies equally to England.
at 18:33